We welcome visitors from all over the world, who come to enjoy the nostalgia of the station, which has been restored to it’s 1940s glory when the Refreshment Room was used as the setting for David Lean’s film “Brief Encounter”. 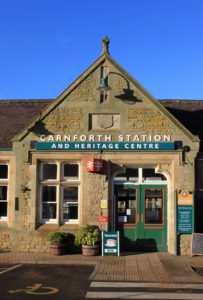 Carnforth Railway Station was opened in 1846 by the Lancaster and Carlisle Railway Company and was originally just a single platform.  In 1856, a small station was built following the connection of the Furness and Midland Railway lines. A year later a new station  and small engine shed were constructed. On 1st August, 1880, the station was rebuilt at a cost of £40,000.

The station was completely rebuilt in 1937 by the London Midland and Scottish Railway Company, financed by over £53,000 of government-funded money. A 890 ft long platform was added for the Furness trains, and the longest unsupported single piece concrete roof in Britain was erected. Carnforth developed into a bustling junction linking stations across the North West from Cumberland through to Leeds. 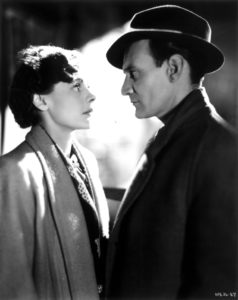 During the two World Wars thousands of servicemen passed through Carnforth Station on route to duty overseas. In 1945 David Lean filmed his romantic classic “Brief Encounter” starring Celia Johnson and Trevor Howard. Carnforth was chosen by the Ministry of War Transport as it was remote and safe from attack. Filming had to take place at night between 10pm and 6am so as not to interfere with daytime train operations.

Carnforth Station’s most famous landmark is, without a doubt, the station clock. Made in the late 19th century by Joyce of Whitchurch, this impressive clock is fully restored and hangs proudly at the top of the Platform 1 subway. The clock is mechanical and is wound by hand on a weekly basis. It well known for the prominent role it played in Brief Encounter and continues to delight visitors and passing rail travellers.

The demise of steam and radical reorganisation of the railways by Dr Beeching in the 1960’s led to a gradual rundown of the station. The mainline platforms were closed  down and physically removed in 1970 prior to electrification of the West Coast Main Line. Carnforth was then reduced to a branch station and  the buildings gradually fell into disrepair.

The Carnforth Station and Railway Trust Co Ltd was formed In November 1996 to restore the derelict buildings and a £1.5 million project was commenced in late 2000 in cooperation with Railtrack. The Trust is a registered charity (No: 1061179), and was created by a group of local people to save and renovate the historically interesting buildings at Carnforth station.

The Friends of Carnforth Station (FOCS) assist and support the Trust. If you would like to join FOCS, please contact the Membership Secretary, Mrs Jo Russell at the Heritage Centre.

We use cookies to ensure that we give you the best experience on our website. If you continue to use this site we will assume that you are happy with it.Ok